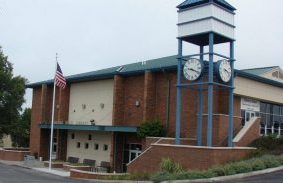 The Library
The Rolling Hills Consolidated Library has served Andrew and Buchanan Counties in various forms since 1961. There are two locations—the Belt Branch and the Savannah Branch—and they provide bookmobile service to outlying areas in the two counties. The library owns over 180,000 items and has an annual circulation of 256,000.

Michelle Mears became the library director at Rolling Hills in January 2014, and decided to migrate to Apollo from Koha in December of 2014.

Automation
Ms. Mears had used Apollo at a previous library and was familiar with its features. She says that what initially attracted her to Apollo was its 21st century price and focus solely on public libraries. In the past, she had used school-based automation systems in public library settings and found that they never quite suited the needs of public libraries. “It felt like square pegs in round holes,” she says. Compared to other integrated library systems (ILS), Ms. Mears found Apollo’s design to be deceptively simple, saying, “I found out in short order that the simple-looking interface of Apollo is actually hiding a powerful engine under the hood, and that everything we could possibly need is there and works well.”

Seamless Migration
Migrating to Apollo from Koha was easy. Prior to migration, staff appreciated that they could have unlimited practice with their own data using the trial migration. This greatly helped smooth the transition to the new system. On the day of the switch, Rolling Hills was able perform the migration in the evening and open the next morning with no errors or loss of time or data.

A New Approach
Rolling Hills’ previous ILS, Koha, was an open-source ILS with many features that were not optimized for public library needs. The overdue process was one such underdeveloped feature, and the library went a year and a half without sending out any overdue notices. Rolling Hills also did not have anyone on staff who could find bugs in the system and write code to fix them, which left them with a system that worked only some of the time.

One of the things Ms. Mears likes about Apollo is that it makes libraries consider their processes regarding members and materials. She says, “We can be more efficient and let go of always-done-it-that-way procedures because the system designers have already thought it through and made wise decisions about what needs to be there and what doesn’t.”

Patron Joy
Patrons enjoy the self-service aspects of Apollo, particularly Reserve Express™ and the ability to update and manage their accounts. The catalog was a hit with both patrons and staff, who appreciate its modern appearance and easy search capabilities.

Staff Joy
The technical services staff at Rolling Hills Consolidated Library have had a very positive response to Apollo. In their previous system, cataloging was awkward and required a lot of inefficient clicking, scrolling, and navigating between many tabs. With Apollo, the bibliographic and holdings records are on the same screen, which makes cataloging much more efficient and user-friendly.

The Best Support
Ms. Mears says, “One of the things I love most about Apollo is that it is a nimble system managed by people who do not hesitate to implement our suggestions whenever possible. I had asked about making a method to check off titles from the Reserve Search List using a tablet to encourage my staff to go paperless. Less than a month later, an update to Apollo included my suggestion. In my 18 years of experience in public and academic libraries using seven different systems, I have never experienced a more responsive ILS vendor than Biblionix. It is the best value for your money of any stand-alone ILS, and Biblionix has the absolute best support staff.”