THE LIBRARY:
The Mediapolis Public Library was started in October 1915 by the newly organized Mediapolis Study Club. The members of this club donated books from their home libraries and purchased seven books. On July 19, 1918, the Study Club asked the town council to establish a Free Public Library and a Library Board was thus created. In 1970, the library moved to its current location. In 1999, the library was the target of arson and sustained much water and smoke damage. The library had to be moved to a temporary location while the renovation took place. Having to do without the library, the community rallied to rebuild the library and has provided substantial support ever since. As part of this support, funds were raised to automate.

In October 2002, Kim Earnest was hired and is the current Library Director. Having worked for many years in an academic library, Kim was used to automation. Having the funds available, she purchased the library’s first automation system. 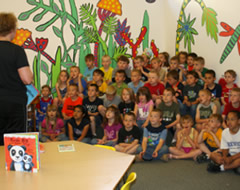 AUTOMATION:
In March 2003, the Library’s first automation system was installed. Unfortunately, the system purchased was designed for schools and could not be adapted for a small library. It was the best choice available at the time for a small library on a limited budget. With this system, you took what they offered and little or no adjustment could be made in the product to fit your needs. Worse than that was the fact that two servers were needed to run the system, one for the software, and another for the web interface to make it available to the public. As with most small/medium library environments, the technical expertise needed to setup, run, and maintain such servers was not available. Then in April 2008, the primary server died.

MIGRATION:
Biblionix to the rescue! Not only did the main server die…but the backups were not working properly thus stoking the worst fears of having lost seven months of data. However, a board member was able to retrieve data that was only a week out of date and Biblionix did the rest. Having spent a week trying to decide if the server was repairable, the next few days afterward were spent looking at “hosted” automation systems. There was no company out there that was more accommodating than the Apollo team. They uploaded what data we could retrieve and got it to work. “They made me feel like I was their only concern”, Kim reflected. “We worked together after hours and on weekends to get back up and running.” On April 21, 2008 the library went “live” with the Apollo hosted automation system. “It was fabulous! The patrons never even realized that our old system had crashed. It was seamless,” said Kim.

A NEW APPROACH:
Apollo is a patron friendly system. In this system, patrons are able to update their personal account, place reserves on materials themselves, place reserves on authors they like, renew items from home, pay their account online, see cover images, plus much more. The library staff loves Apollo’s features as well. From the ease of cataloging to patron notices, from linking patron family members to reports, the staff couldn’t be happier. One of their favorite features, is email notifications. Apollo has the capability to email a patron 3 days before their item is due as a heads up reminder. Overdues can be emailed which saves a tremendous amount of staff time, and the circulation interface is “a piece of cake.” Apollo also works well with our state-wide database. And all this is accomplished with no on-site server. Biblionix handles all the backups and mirroring with top tier, state-of-the-art Internet data centers.

SERVICE:
In the words of Kim Earnest, Library Director, “Service is the ultimate! It takes a phone call or email and the Apollo team listens. In my more than 20 years in libraries working with automation systems, Apollo has offered the BEST service I have ever seen. If you want it done and it is possible to do, they will do it. And they will do it as quickly as possible. Biblionix/Apollo truly cares about small and medium sized public libraries.”