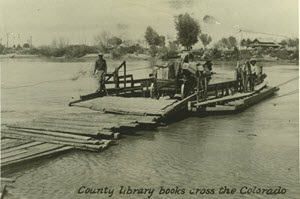 The Library
Located in far southeastern California, Imperial County Free Library serves all of unincorporated Imperial County and the cities of Calipatria, Holtville, and Westmorland. When the library was first established in the early 1900s, books were ferried over the Colorado River from Yuma, Arizona to early locations.

Today, Imperial County Free Library serves an area of 4,250 square miles and has a service population of 53,800 people. Connie Barrington has been the library director for fifteen years.

The library has a strong emphasis on promoting literacy in children and adults. To that end, they offer a host of programs like bilingual story times, Baby Times for children aged two and under, and a free adult literacy program. They lead summer reading programs at eight locations, including several schools, and implement practices from ALA’s Every Child Ready to Read toolkit in their programming. In addition, they provide computer classes, active teen groups, and specialized programs throughout the year. Their Dia de los Niños celebrations attract more than two hundred people annually.

Automation
Ms. Barrington first discovered Apollo when she visited the Biblionix booth at the Association for Rural and Small Libraries convention. After she returned home, she joined the Biblionix user forum and began reading current customer reviews of Apollo, which cemented her decision.

Seamless Migration
Imperial County enjoyed a painless migration to Apollo in July 2015. Says Ms. Barrington, “You folks couldn’t have done more to make it go smoothly. I really appreciated the patience and the help. Any glitches were on our end, not yours.”

Convenience and Flexibility
Imperial County Free Library’s service area mostly comprises small towns with populations of 2,000 or fewer people. Due to the size of their service area, the library has four branches and two outlets. Because Apollo is cloud-based instead of client/server-based, its location-independent accessibility is ideal for libraries with bookmobiles or outlet locations. According to Ms. Barrington, “Apollo has given us greater flexibility in taking our laptops out to serve in those areas.”

A New Approach
Apollo’s ease of access has been a boon to Imperial County Free Library. Ms. Barrington especially appreciates that her library’s data is always accessible. She notes, “Apollo believes our data is our data, unlike others.” Whereas many automation companies force libraries to pay exorbitant fees for copies of their own data, Apollo allows libraries to download it free of cost at any time.

Their previous ILS (a “big name” product) also required that the library buy a number of expensive licenses, which adds up quickly at a multi-staff library like Imperial County. Worse, when the maximum number of simultaneous sign-ins had been reached, the program would boot users offline. Apollo allows an unlimited number of staff members to be signed in at one time, which keeps costs down and productivity high.

Patron Joy
Patrons at Imperial County Free Library appreciate receiving Apollo’s automatic due date warnings and other notifications via text and email. They have also been enjoying the new catalog, including the ability to renew their own materials and the new book crawl, which helps them discover the library’s newest acquisitions. And members are placing more reserves, too.

Staff Joy
Staff appreciate the switch to Apollo as well. They report that Apollo is easier to use than their former ILS, and they especially love the ability to copy an existing bibliographic record into a new one.

A Satisfied Customer
In Ms. Barrington’s words, “I am your biggest cheerleader. Support has been phenomenal and we have capabilities, like self-check out, that we will eventually be using. It couldn’t be nicer or easier to work with you folks. It is great to get something we really like, at such a reasonable price!”