THE LIBRARY:
The Salado Public Library is located in Salado, Texas. It opened its doors to patrons on November 7, 1986, staffed entirely by volunteers. The first paid part-time certified librarian was hired in 1995. All operating expenses were met through donations, gifts and memorials, and fundraising activities. In May 1998, The Salado Public Library District was created by a vote of the citizens of Salado. It became the second library district in Texas. In January of 2005, Marsha McGuire became the library’s director. The library currently serves over 9,000 people with a collection of 16,500 items and a circulation of over 35,800.

AUTOMATION:
In 1993 the library was automated. The system was provided by a renowned name in library automation. However, it was designed for schools and was poorly suited to the needs of a small public library. In particular, its services for patrons were extremely limited. 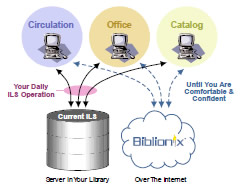 A NEW APPROACH:
In July of 2006, Ms. McGuire saw a demonstration of Biblionix’s Apollo hosted automation system. She was struck by the capabilities and benefits of Apollo and how they matched the needs of her library. It was a breath of fresh air. She had found an automation vendor devoted solely to small- and medium-sized public libraries. Taking advantage of Biblionix’s no risk migration, Ms. McGuire uploaded MARC, patron, and other data to Biblionix. Biblionix imported the data into an Apollo account and provided the library with URL and log-in information. Thus, the library could actually use Apollo as if it were actually the library’s automation system.

RIGOROUS TESTING:
Over the next 2 months, Ms. McGuire and her staff experimented with Apollo with their own materials and library cards while the library continued to operate normally on the existing automation system. They viewed many reports, tried the circulation process and patron renewals, and on and on. With each day their confidence and comfort grew. With each day, the prospect of migrating became more and more desirable. All of this was accomplished with no payment. All of this was accomplished with no server and no software to install. In October of 2006, the library Board of Directors formally approved the Apollo migration. Ms. McGuire decided that January 2, 2007 would be the day the library would open using Apollo.

MIGRATION COMFORT:
When the library closed on December 31, Ms. McGuire uploaded the latest library data with confidence. Since she had done it previously, there was no uncertainty about how to do it or if it would work. This was very comforting. Biblionix processed the data again as it had done before. Part of that process was to correct common inconsistencies in the MARC records. That night, the library’s account was completely updated with the new data. The library reviewed the data to ensure that it was complete and accurate. Ms. McGuire made the decision that Apollo was fit for duty and that the library would open on schedule. In fact, the library could have opened with Apollo the next day.

On January 2, 2007, the Salado Public Library opened its doors with Apollo as its ILS and never looked back.

SUCCESS:
With Apollo now functioning as the backbone of the library, the staff and patrons are delighted. Here are some of the comments: