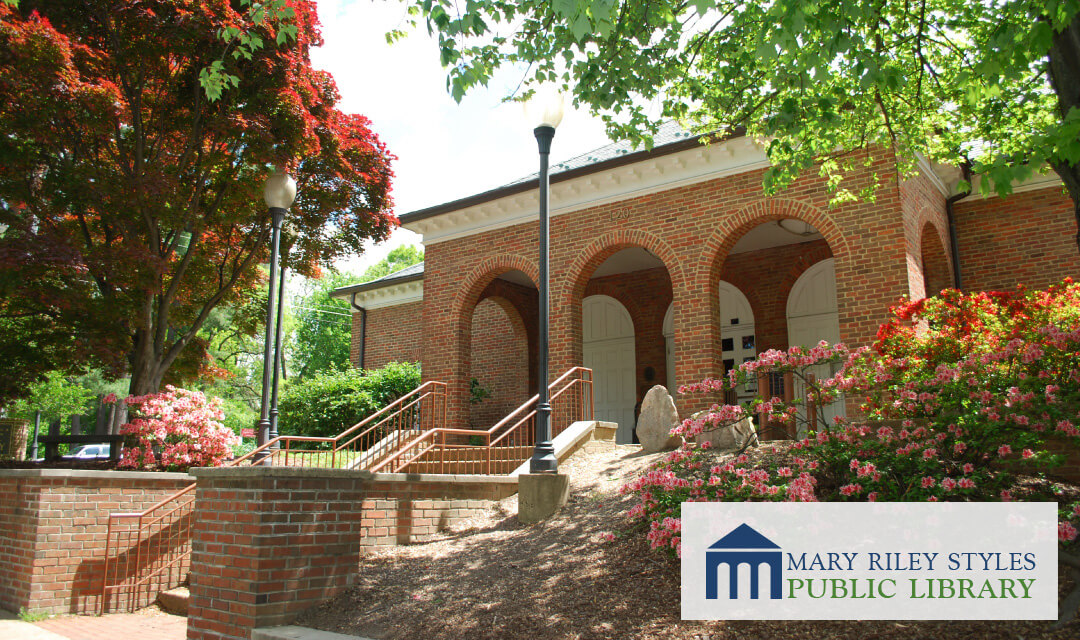 Mary Riley Styles Public Library is named after Mary Riley Styles, who dedicated her life to public service and founded the first library in Falls Church in 1899, beginning with a collection of 650 books.

Upon her death in 1946, Mary Riley Styles’ family donated a portion of the Riley farm to the city, and Falls Church became the first community in northern Virginia to plan a building specifically intended for use as a library. Groundbreaking for the current library building took place in August 1957.

Today, Mary Riley Styles’ legacy lives on. In 2019, there are over 30,000 cardholders using a collection of more than 120,000 books, audiobooks, DVDs, and electronic materials. The library also provides Wi-Fi, digital research databases, downloadable collections, streaming and information in many other formats. The library is also home to the Local History collection which houses documents, maps, and other items related to Falls Church history. The library is truly an integral part of the Falls Church community, a tribute to the hard work, foresight, and devotion of citizens like Mary Riley Styles who worked tirelessly to keep it going in its infancy.

Jenny Carroll has been with the library for twelve years and has been the director since August 2017. Prior to Ms. Carroll, Mary McMahon was the director who made the decision to migrate to Apollo in June 2017.

While she was supervisor of the Youth Services department, Ms. Carroll remembers telling then director Mary McMahon that Apollo had recently been awarded LibraryWorks’ Modern Library Award Product of the Year. The library was having significant issues that were not being resolved with their prior ILS, so they were looking for a change and contacted Biblionix for a trial migration to Apollo.

Ms. Carroll says the cost savings of Apollo were a big attraction in addition to wonderful customer service. As they used the Apollo trial, they enjoyed its features and ease of use, and they appreciated that Apollo was designed specifically for small– to medium-sized public libraries like theirs. They were delighted to learn that demand on their IT staff could be reduced with Apollo as well.

Ms. Carroll notes that the migration to Apollo was extremely smooth. She recalls, “[The trial migration] allowed staff to become familiar with the product before going live with the public. When it came time to load our information, we did need to upload twice. However, since library staff had the extensive time in the sandbox, they found the issues quickly and the information was loaded again. We made the deadline for opening to the public and Biblionix did amazing work to make it happen.” She notes that Mary McMahon, the director at the time, was very pleased with the migration process.

Staff have found that cataloging is easier and more streamlined. They especially like the improved ability to manage authorities, Apollo’s ability to search for and import records from other libraries, and the improved interface between the cataloger and the MARC record.

The Self-Checkout feature in Apollo means that the library can provide the convenience of self-service to their patrons for the price of a computer, which Ms. Carroll views as a huge bonus. And Biblionix continues to make enhancements to functionality for staff, including a new Dashboard interface.

Members at the Mary Riley Styles Public Library like the color coding of results in the catalog, which indicates at a glance whether items are currently available. The public also appreciates the simplicity of the catalog display and the use of everyday language. And as part of the migration agreement, Biblionix added faceted searching in the public catalog. “Biblionix did an awesome job developing that search option,” says Ms. Carroll.

Catalogers love being able to import records so easily. The ease of running reports is a huge improvement over their former ILS, which was convoluted and time consuming. And importantly, the hosted nature of Apollo has improved stability and has removed a huge burden for IT staff.