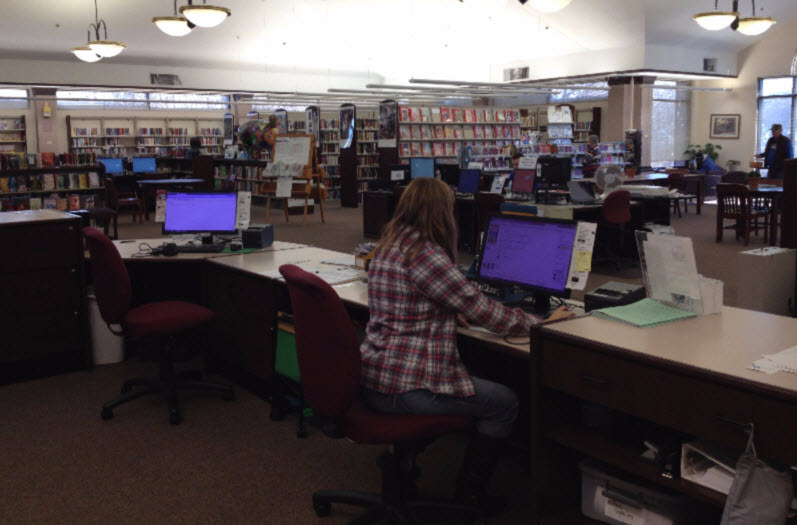 The Library
The Mason County Public Library in Maysville, Kentucky has more than 13,000 members and 55,000 holdings. Last year, they had 112,500 circulations. Valerie Zempter has been the library director for ten years. Pam Erskine is in charge of cataloging, and Melissa Fulton is the circulation manager. Mason County Public Library went live with Apollo in July of 2016.

Automation
Ms. Zempter first learned about Apollo online while searching for a new ILS. She was initially attracted to Apollo because of its affordability, simplicity, and responsiveness. The library had an Apollo trial for a month before going live, which enabled staff to explore its features using their own data.

As further research, Ms. Fulton visited other libraries’ Apollo catalogs to get a sense of the public’s user experience with a live library. She was impressed with Reserve Express™, which was a vast improvement over their former ILS, Polaris by Innovative Interfaces, as well as Apollo’s ability to relate family accounts and show all their charges together.

Seamless Migration
Mason County Public Library’s migration went smoothly. Says Ms. Zempter, “I wasn’t in town on the go-live date, and I was prepared for panicked phone calls and general collapse. We were happy that it would be a holiday weekend, so the damage would be limited in the event there were problems with connections, equipment, records, etc. As it turned out, I didn’t have more than one email, and it was for a relatively minor issue. Everything seemed to work well, with very few problems.”

Ms. Fulton agrees. “It went very smoothly. I spent a good month with the trial beforehand and with the training videos so I could train the staff. Any issues that I saw were addressed very quickly by the Apollo staff. If I saw something that I wanted changed, it was changed. If I had a problem or question, I would email and have a response within an hour—usually less. Very prompt service.”

A New Approach
For many staff members at Mason County Public Library, Apollo’s customer service is the biggest improvement over Polaris, but there were many additional features that came to mind, like Reserve Express, reports, inventory, and linked family accounts. Ms. Zempter says, “Customer service is the biggest improvement, although the ability to check family members’ prior and current borrowing, and ease of setting up automatic holds are all big improvements.” Ms. Fulton, who worked with Polaris for more than ten years, says, “Our previous system was cumbersome. There were features of it that some staff members honestly didn’t know about. If we had problems, the response time was terrible.”

Ms. Erskine likes Apollo’s tabbed approach and better reports. Ms. Fulton echoed that sentiment: “The financial reports are more detailed. [With Polaris,] there were so many things that didn’t get explained financially at the end of the day and we weren’t comfortable with that.”

Staff Joy
As circulation manager, Ms. Fulton appreciates many of Apollo’s features, such as the ability to switch from one patron’s account to a family member’s account, the ease of managing patrons’ fines, and the ability to edit the library’s list of Reserve Express authors.

Ms. Zempter added, “We’re astounded by the ease of managing ILLs, and we really like the customizable overdue letters.” Ms. Fulton echoed her sentiments: “The overdue notices are a big change. Previously, we sent our information to an attorney to draw up an overdue letter. Apollo provides that letter and it is such a time saver!”

Impressive Inventory
Apollo’s inventory has also been a great improvement. Mason County’s first inventory with Apollo found many inconsistencies that had long gone undetected with their former ILS. Says Ms. Fulton, “Inventory would have to be the biggest improvement I’ve seen. I really like that any items in house that are checked out are resolved automatically. On our old system, we would have to stop scanning, switch screens, check it in, waive the fine, and go back to the inventory screen. There were so many cataloging issues that were never caught previously. We now have a way to find those bibliographic records that have no items attached and delete them. It will be so nice when we have our catalog cleaned up.”

She continued, “We also like the fact that we can run Apollo from any computer or tablet in the building. Previously, we needed a license to run our software, which limited the number of PCs in use, especially during inventory. This year, it went much more quickly because I could have numerous people out on the floor scanning.”

Patron Joy and Reserve Express
Patrons of the Mason County Public Library are also excited about the many new or improved features that Apollo offers, particularly Reserve Express, text notifications, email receipts, and the ability to access OverDrive directly through the catalog.

Ms. Zempter says of Apollo and the Reserve Express feature, “Once we demonstrate some of the features of the catalog, especially our ability to text notices, the reaction is unfailingly positive. The most dedicated readers appreciate the ability to create their own standing order profile.”

Staff and patrons at Mason County agree that the upgrade to Apollo has been a resounding success. Patrons appreciate its elegant, modern features, while staff appreciate the immense time savings, ease of use, and outstanding customer service.